On 7-9 July 2022, POLLINIS organised a scientific conference entitled “Turning Islands into Refuges for Pollinators”, which was held during the first festival dor the bees of Groix. Renowned biologists, entomologists and ecologists shared the results of their studies on pollinators, honybees and pesticides durinf interventions that POLLINIS summarsied. 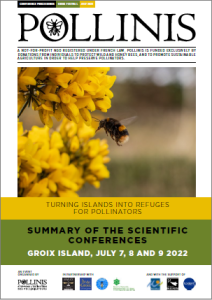 The island of Groix is a preserved natural environment where wild pollinators and bees live in a remarkable setting, almost free of pesticides and intensive beekeeping. The island offers an exceptional field of experimentation for the study of conservation solutions for wild pollinating insects and local bees that can be replicated and adapted worldwide.

Since 2019, POLLINIS, a non-profit organisation fighting against the extinction of pollinators, has been conducting several scientific field researches in order to document the unique situation on the island, which is notably home to the least hybridised populations of endemic dark honey bees (Apis mellifera mellifera).

Aware of the necessity and urgency of protecting the bees and pollinators of Groix from all threats, POLLINIS and its partners – the Association for the Safeguard of the Black Bee of Groix, ASAN.GX, the municipality of Groix, the International Federation of Beekeepers’ Associations, Apimondia and the François Le Bail Nature Reserve – have organised this festival in order to raise awareness of the specificity of Groix and its pollinators among the general public, the scientific community and the political class.

This first festival hosted an international scientific conference entitled “Turning Islands into Refuges for Pollinators’’, where some twenty eminent biologists, entomologists and ecologists from all over the world shared the results of their scientific studies on the conservation of pollinators, the impact of pesticides
and the biology of the honeybee. Several specific studies being carried out on the island of Groix were also presented during the three days of debate.

All of these presentations are summarised here : 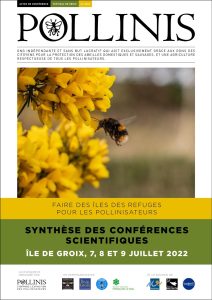 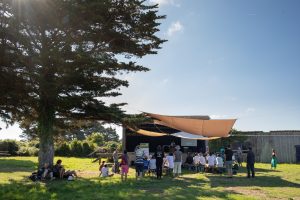 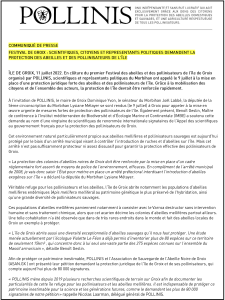